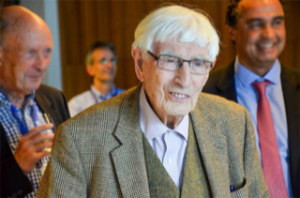 Jack Dunitz passed away on September 12 2021, at the age of 98, in Zurich. With Jack, we lost a great scientist who not only contributed a lot to modern crystallography but, during his 75 years of research, also left impressive footprints in the world of chemistry.

Jack Dunitz was born in Glasgow, Scotland on March 29, 1923. When he started his studies at Glasgow University in 1940, he chose chemistry because his science teacher at school presented it as an interesting field. However, during his graduate studies, he did make a conscious decision towards crystallography. During wartime, the research students were given no choice but instead were assigned to different research fields, and so Jack came to John Robertson’s group to study chemical crystallography in 1943. From 1946 to 1948 he worked as a research fellow in Dorothy Hodgkin’s laboratory at Oxford, followed by three years at Caltech (1948 – 1951) before returning to Oxford (1951 – 1953). Another year at Caltech followed (1954) and one year at the US National Institute of Health (1955) before he was recruited by Lawrence Bragg in 1956 to work at the Royal Institution in London.

In 1957, Jack Dunitz moved to Zurich to take up his professorship at the Organic Chemistry Laboratory at the ETH, a post which he held until his retirement in 1990. After his retirement, he was still very active and could be found regularly in his office at the ETH. Treatment for a broken bone unfortunately led to complications, which sadly resulted in his passing.

The scientific work of Jack Dunitz spanned many areas. He was involved in analyzing the electronic structure of ferrocene, the reactivity of medial-ring compounds, electron density distributions, polymorphism, phase transformations in solids, weak hydrogen bonding, and crystal structure prediction. Well known is his work on chemical reaction paths derived from crystal structure studies. Together with Hans-Beat Bürgi, they defined the Bürgi-Dunitz angle that describes the angle of attack of a nucleophile at the carbon center, which helped to understand the synthesis of chiral compounds.

Jack Dunitz received numerous awards for his excellent scientific work. He received the Paracelsus Prize of the Swiss Chemical Society (1986), the Gregor Aminoff Prize of the Royal Swedish Academy of Sciences (1990), and the Buerger Award of the American Crystallographic Association (1991). He was the recipient of the first Havinga Medal (1980, University of Leiden) and the Bijvoet Medal (1980, University of Utrecht). Jack held honorary doctorates from the Technion, Haifa (1990), the Weizmann Institute of Science (1992), and the University of Glasgow (1999). He was elected Fellow of the Royal Society in 1974, became a member of the German National Academy of Arts and Science (1979), foreign member of the Royal Netherlands Academy of Arts and  sciences (1979), an international member of the US National Academy of Sciences (1988), member of the Academia Europea and the European Academy of Sciences and Arts (1989), and received honorary  memberships of the American Academy of Arts and Science, the Swiss Society of Crystallography, the Swiss Chemical Society, the Royal Society of Chemistry, and the British Crystallographic Association.

Although his greatest passion was science, Jack Dunitz was also a friend of classical music, with a special love for Mozart and Brahms. Jack was also a keen sportsman. He became a member of the Swiss Alpine Club as early as 1946 while still living in Oxford. He loved Alpine hiking in summer and skiing in winter. He played tennis with his group members and, at an advanced age, still went swimming regularly with his wife Barbara in order to keep fit.