Click here to find details and recordings of past webinars

The ECA kindly invites you to the 3rd ECA Lunch webinar:
John R Helliwell – Precision and accuracy in structure–function studies 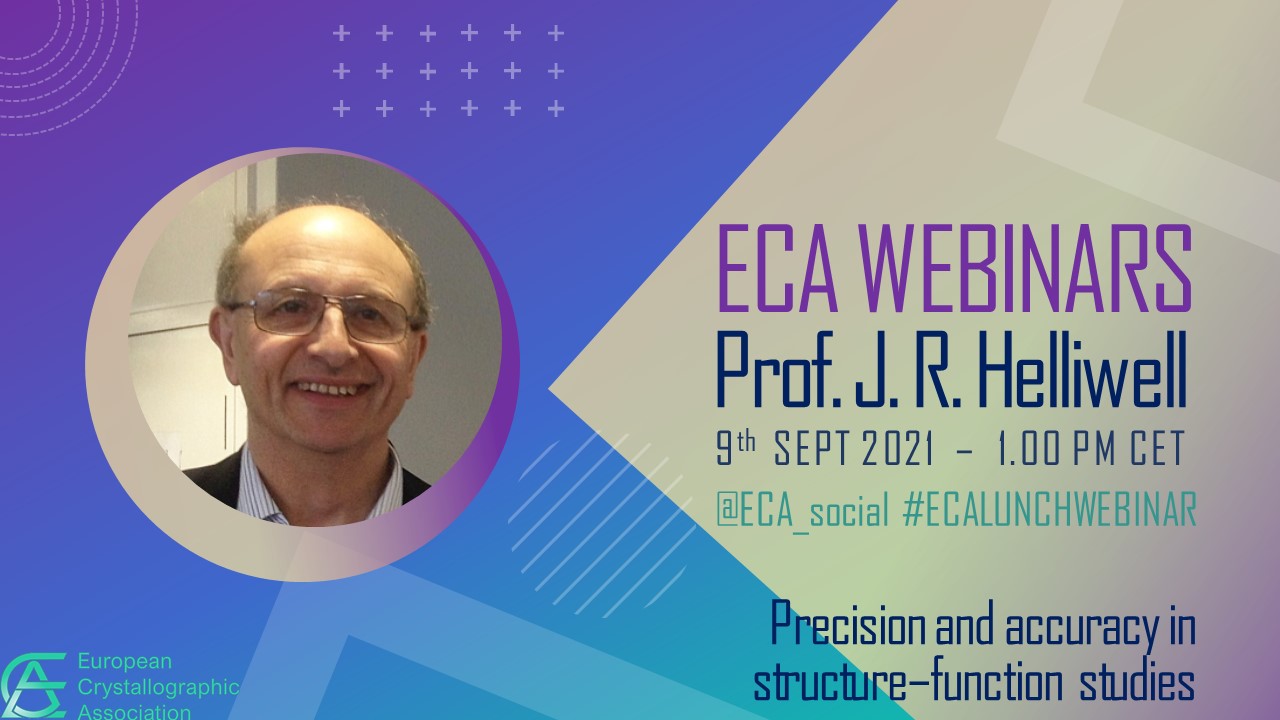 In this seminar we will look at the terms precision and accuracy and how they can be understood in crystallography.The talk will be held along the lines that are also drawn in John’s recent article:
Combining X-rays, neutrons and electrons, and NMR, for precision and accuracy in structure–function studiesBiography

John R Helliwell, DSc (Physics, University of York), DPhil (Molecular Biophysics, Oxford University) is Emeritus Professor of Chemistry at The University of Manchester, where he served as Professor of Structural Chemistry from 1989 to 2012. Academic teaching from 1979 till 1988 was at the Universities of Keele and York in the physics departments there. He is a researcher in the fields of crystallography, biophysics, structural biology, structural chemistry and data science. He was also based at the Synchrotron Radiation Source at the UK’s Daresbury Laboratory, in various periods of appointment between 1979 to 2008, including in 2002 as Director of Synchrotron Radiation Science. He is a Fellow of the Institute of Physics, the Royal Society of Chemistry, the Royal Society of Biology, and the American Crystallographic Association, an Honorary Member of the British Crystallographic Association and of the British Biophysical Society. He is a Corresponding member of the Royal Academy of Sciences & Arts of Barcelona, Spain and Honorary Member of the National Institute of Chemistry, Slovenia. His awards include the European Crystallographic Association Eighth Max Perutz Prize 2015, the American Crystallographic Association Patterson Award 2014, and the ‘Professor K Banerjee Endowment Lecture Silver Medal’ of the Indian Association for the Cultivation of Science (IACS) 2001. He published over 200 scientific research papers and several books, e.g. Macromolecular Crystallography with Synchrotron Radiation with Cambridge University Press (1992), published in paperback in 2005 and Macromolecular Crystallization and Crystal Perfection with N E Chayen and E H Snell), Oxford University Press – International Union of Crystallography Monographs on Crystallography (2010). He has published several Scientific Life, popular science, books in recent years, which are with CRC Press Taylor and Francis.

About the ECA Lunch webinars:

The ECA lunch webinars with an educational or scientific focus were invented following the strong wish to strengthen and vitalize the European crystallographic community. They are a monthly webinar series by the European Crystallographic Association (ECA) and involve all GIGs/SIGs.

The webinars are organized in an online setting such as Zoom (45min + 15min Q&A) and are taking place every first or second (depending on the schedule of other ECA activities) Thursday of a month at lunchtime (1:00 PM CET). Webinars will be announced via social media, mailing list, and here.