Subscribe to our newsletter to receive an info-mail when a new webinar is going to take place: Register for our ECA lunch webinar newsletter.

Serial crystallography is already an infamous producer of large data volumes.  Storing all of this data is already unsustainable, and the data rates will increase further as X-ray detectors and pulse rates get faster.  A possible solution is to process the frames in real-time, as soon as they are read out from the detector, without ever hitting a filesystem.  In this talk, I will describe how we deployed such a system for the P11 beamline at PETRA III, and discuss the implications on the way we carry out our experiments.

Organometallic compounds such as pincer complexes have been known to be highly active towards carbon dioxide hydrogenation. On the other hand, crystal engineering provide the design strategies for anchoring molecular complexes in metal-organic frameworks (MOFs). Combining these two areas would offer new materials which are highly active towards the conversion of carbon dioxide to high value chemicals. In our approach we have utilized diamine, diimine and pincer based complexes to build new MOFs with catalytic activity. Our research also explores new methods for introducing catalytically active sites in MOF pores. The successful synthesis of molecular catalysts inside MOF pores is confirmed by both spectroscopic and diffraction techniques. Results obtained from this work demonstrates that the introduction of molecular catalysts inside the MOF pores enhances the catalytic activity for the conversion of carbon dioxide to formic acid. 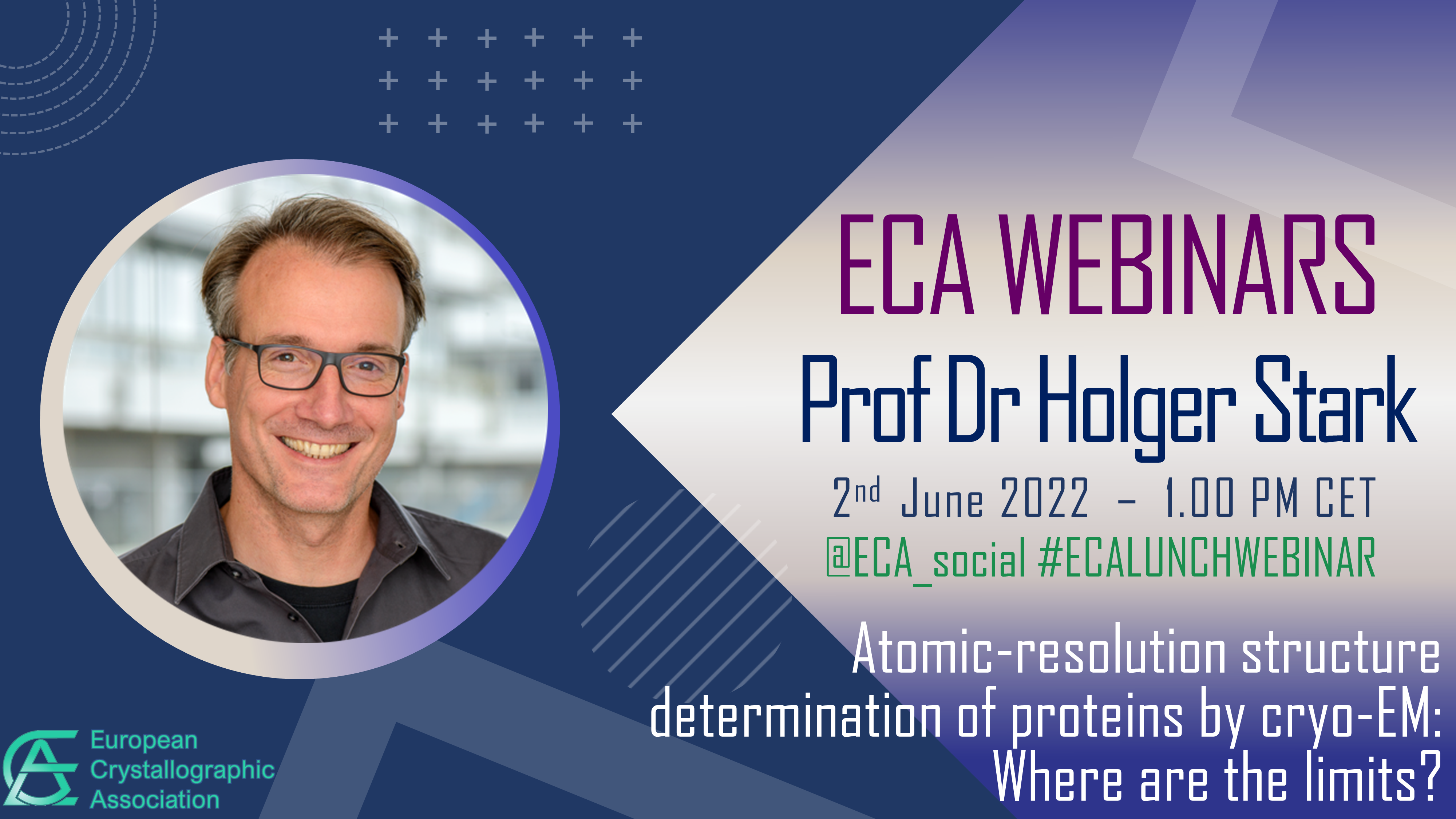 The technological advances in electron microscopy, in detector development and in available image processing tools made cryo-EM a highly successful and rapidly developing method for protein structure determination. The number of structures determined by cryo-EM is currently still growing exponentially and the resolution limit of the technique has constantly been improved over the last decade. We have determined the first true-atomic resolution structure of apoferritin by cryo-EM in which individual atoms are clearly resolved. However, at very high resolution, quality issues in cryo-EM density maps also become apparent. Microscope instrumentation plays a key role with respect to map resolution and map quality. Therefore, I will discuss the resolution limiting factors in cryo-EM and how these limitations can potentially be overcome in the future.

Weak interactions have acquired importance in the scientific community over the last two decades. They have proved to be an essential feature in determining the chemical and physical properties of materials, influencing their three-dimensional structure, reactivity, organization, and biological activity. The number of papers and reviews dedicated to the crystallographic and theoretical study and analysis of hydrogen and halogen bonds, π···π and C—H···π interactions, just to cite a few, has grown exponentially over the years, underlining the applicability and usefulness of weak interactions to a wide range of scientific disciplines. Indeed, weak interactions are essential in the formation of inclusion compounds, in the self-assembly of host–guest molecular complexes, in molecular recognition, in the study of polymorphism, co-crystals, phase transitions and charge density. The mastering of supramolecular interactions can help to rationally design materials endowed with specific properties and it is an essential tool in crystal engineering. This talk will highlight the importance of structural analysis in understanding weak interactions in the solid state with examples taken from the literature and from personal research.
This abstract has been adapted from: Acta Cryst. (2018). E74, 569.

Recent experiments have demonstrated the potential for ultrafast changes in the functional properties of materials upon selective optical excitation of particular vibrational (phonon) modes. The chemical diversity of complex oxides, and their strong crystal structure-properties coupling, have made them ideal test systems for new experimental approaches that exploit anharmonic phonon couplings to induce and modify magnetism, superconductivity and ferroelectricity with light. In this talk, I will describe our recent theoretical efforts exploring ultrafast optical control of the functional properties of ABO3 perovskite oxides. In particular, I will focus on our attempts to connect the physical mechanisms of optical excitation to crystal chemistry using two examples: dynamical stabilization of a non-equilibrium magnetic phase in GdTiO3, and understanding changes in non-equilibrium structure and properties in terms of intrinsic microscopic quantities for LaAlO3 under pressure. Our work complements recent experimental studies involving X-ray free electron lasers to resolve subtle changes in crystal structure due to optical phonon pumping, and highlights the importance of understanding the contributions of small structural distortions to the optical response in perovskites, in contrast with large-amplitude distortions, such as so-called rotations of the BO6 octahedra.

Quasicrystals are exotic forms of matter with symmetries that were once thought to be mathematically impossible. The first known examples were synthesized in the laboratory over 35 years ago, but could Nature have beaten us to the punch? This talk will describe the decades-long search to answer this question, resulting in one of the strangest scientific stories you are ever likely to hear.

According to the Oxford English Dictionary a phase diagram is “a diagram which represents the limits of stability of the various phases of a chemical system at equilibrium, with respect to two or more variables.” In high-pressure research these variables are most commonly referred to as temperature and pressure, for a given chemical composition. This definition, however, does not apply to the majority of simple molecular compounds consisting of light elements, including almost all organic compounds. These systems are metastable at any given thermodynamic conditions, as they never correspond to the Gibbs free energy minimum. In spite of that, metastable states are often promising technological materials. Moreover, dynamic compression experiments have recently demonstrated how the experimentally observed phase boundaries depend on transition kinetics. Hence, navigating the energetic landscape of highly polymorphic systems can lead to ‘dynamic phase diagrams’ or ‘metastable phase diagrams’ (transitional diagrams), which do not conform to the quoted definition, but can be extremely interesting for technological applications or fundamental studies. Throughout the talk, concepts will be illustrated by use cases from literature and own research.

In this talk I will discuss our groups efforts to use electron diffraction to solve problems in organic chemistry. We will specifically discuss applications in natural products science, including the structural re-assignment of well-known natural products and the discovery of new natural products. We will also discuss applications in the structural determination of organometallic complexes, reactive intermediates, and functional materials. A brief survey of opportunities for future discoveries and advances will also be discussed.

Hydrated crystal structures, i.e. crystal forms containing water as an integral part of the crystal lattice, are inherently difficult materials to work with in the pharmaceutical sciences. We thus need to know about the existence of hydrates as soon as possible in the development of a new drug to address solubility and stability issues during the formulation stage. To gain this information, current state-of-the-art is the serendipity-driven crystallisation screening, in some cases with the help of crystal structure prediction. In this talk, Katharina will present an alternative approach to thinking about hydrates, how and when they crystallise, and which technologies that are available to fundamentally understand the interaction between drugs and water.

Kathi Edkins is Reader in Pharmaceutics at the University of Manchester where her research group focuses on pharmaceutical disordered materials ranging from glasses to gels with a special focus on the solution state before crystallisation. Being a pharmacist by training, Kathi studied the pharmaceutical solid state for her PhD in Innsbruck, Austria, before moving to Durham, UK, for a postdoc in crystallography. After a short stint as service crystallographer in Wuerzburg, Germany, Kathi’s academic career started as Lecturer at the newly formed Division of Pharmacy at Durham University in 2014 before moving to the School of Pharmacy at Queen’s University Belfast in 2017. She is in Manchester since 2020. She has a keen interest in using neutron scattering in the pharmaceutical field, and her research in this field was honoured by the BTM Willis Prize in 2016. She has published over 55 scientific research papers and held numerous invited talks at conferences and seminars. Currently, Kathi is serving as secretary to the SIG13 on Chemical Crystallography and Molecular Structure.

In his talk Simon will present his perspectives on and insights to his field and highlight cornerstones of his research.

The main field of the research group is method development in quantum crystallography and application of the new methods to bonding analysis in inorganic and bio-organic chemistry. They have a strong focus on a broad spectrum of areas: “X-ray Wavefunction Refinement”, “Relativistic Effects in the Electron Density” and they investigate “Electron-Density – Property Relationships in Inorganic Chemistry”

More information on Simon can be found here.

Protein crystals are used in X-ray diffraction experiments to determine the 3D structure of the macromolecule which forms the building blocks of the crystal. During a diffraction experiments such a crystal is rotated in an X-ray beam and the diffracted waves create a distinct pattern which is recorded as intensities on a detector. The neatness of packing the building blocks inside the crystal, the stability and brightness of the X-ray source and beam along with the recording capabilities of the detector all have an influence on the quality of the data that can be achieved in a given experiment. The process for turning the intensity spots on a diffraction image into a list of reflections is called data reduction. Several metrics have been developed, to assess the quality of data at different steps during the data reduction process. The resulting list of reflections and the quality of the data encoded therein is crucial for the next step, phase determination, which allows a crystallographer to elucidate the internal 3D structure of the building blocks. For data of low quality, a researcher will often encounter many difficulties when attempting phase determination and most likely will not be able to identify the locations of atoms within the crystal.In this seminar we will look at the general term “data quality”, which factors affect the data, how this applies to the case of macromolecular crystallography, what procedures have been put in place to assess data quality and how to improve it.

Dr. Andrea Thorn is a crystallographer and structural biologist based in Hamburg. She is a driving force behind the so-called corona structural task force (https://insidecorona.net/).Andrea did her PhD from 2008-2011 in George Sheldrick’s lab at the University of Göttingen on the topic: “Practical approaches to macromolecular X-ray structure determination”. She then went for a postdoc to the UK, first with Prof. Dr. Randy Read and then as a Marie Curie Fellow with Garib Murshudov. She did then software development at the Diamond lightsource synchrotron while working on Cryo-EM. After a one-year stay at the XFEL in Hamburg she became a junior group leader in Würzburg for 3 years. Since October 2020 she is a group leader at the University of Hamburg.

Andrea is a computational crystallographer working on the development of models to handle structural analysis of proteins and macromolecules by Cryo_EM. In her talk she will talk about her perspectives on the achievements of crystallographic research in the context of the COVID-19 pandemic.