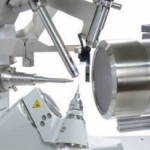 The mission of  the European Crystallographic Association SIG6 (Special Interest Group 6) is to promote access and awareness of crystallographers to new Instruments and Experimental Techniques.  This concerns instrumentation & methods and particularly those who use synchrotron-radiation, FEL, neutrons and combined methods. We are involved in the organization of schools, conferences and symposia for the ECM-Meetings.

The SIG6 was founded in 2000 led by Prof John R Helliwell whereby the appropriate documentation of the SIG6 name, constitution and supporter signatories was submitted to and approved by the ECA Council.

In 2005, at Florence,
As the Chairman J. Helliwell had served 5 years in establishing and then running the SIG he proposed the Vice-Chairman J L Hodeau to be the next Chairman. Hodeau became the IET SIG 6 chairman in August 2005.

In 2011, at the IUCr meeting in Madrid, Robert Cernik was appointed as the new chairman of SIG6, followed by Thomas Tschentscher after ECM-27 in 2012, and Ullrich Pietsch in 2014.