On September 1st, 2019, Sybolt Harkema, former Assistant Professor at the Technical University Twente, died at the age of 78 years. 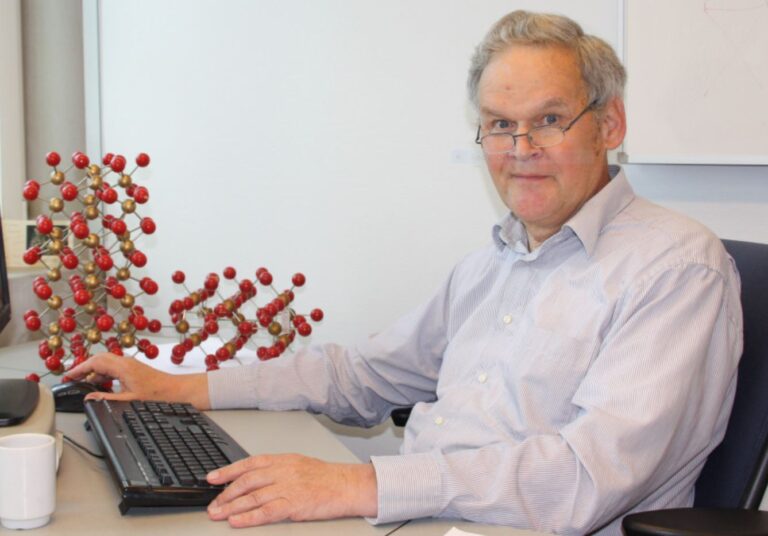 Sybolt Harkema was born in Noordeloos, the Netherlands, as the son of vickar Harke Harkema and his wife Agaath. He visited the secondary school (lyceum) in Zeist at the gymnasium department. After his study at the University of Utrecht in 1964, where he received his Masters degree in Physical Chemistry and Theoretical physics, he went to the University of Twente, where he was appointed as scientific co-worker in the newly founded group of professor D. Feil (Chemical Physics). He received his Ph. D. in this group in 1971. Title: Electron density and X-ray diffraction. Hereafter he was appointed to associate professor in this group. 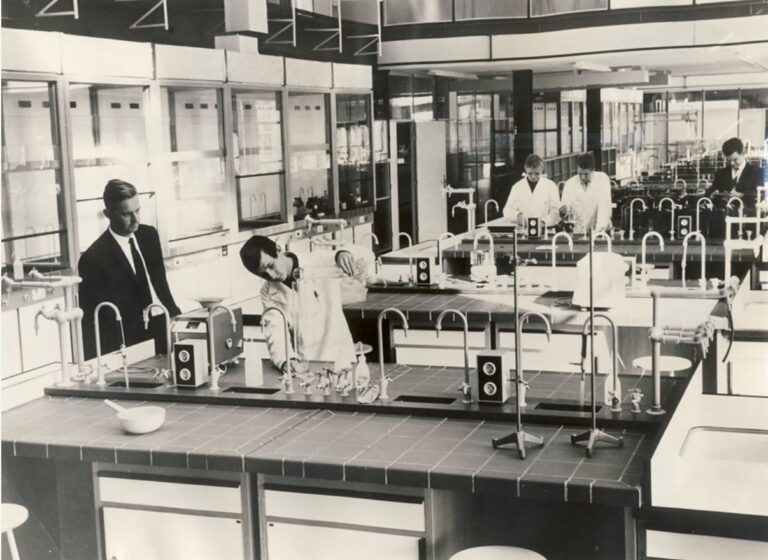 Practicals Chemical Technology in “de Hallen” in 1965. Sybolt Harkema in the back on the right. Photo: Beeldbank Universiteit Twente

Several molecules in which a ureum molecule and uronium ions were involved, were prepared. Crystals could be grown of these complexes as salts. At that time unit cells could be determined by the Weissenberg method. The measurements were done on a diffractometer from Enraf-Nonius (AD 3), which had to be programmed with a paper tape. The results, again, were punched on a paper tape. The programming of the tape and the reading of the result was done on an IBM /360 computer, which was at the time a modern computersystem (the first mainframe system at the University). It could be programmed nicely in FORTRAN, the language of the crystallographers. Sybolt could very well deal with this. In the meantime we developed software for calculating structure factors and standard deviations and a program for computing the Fourier, Difference Fourier and Patterson sections (Song Loon, 1967). A local version of the ORFLS (Busing and Levy, 1962) program was used for the refinement procedure. The program ORTEP (Johnson, 1956) was used for preparing the stereoscopic picture of the crystal structure. This program also calculated bond angles and distances.
At that time the refinement was only possible with spherical scattering factors on the atoms. So, in the Difference Fourier the deviations of the spherical model, which was put on the individual atoms, was clearly visible: chemical bonds, lone pairs and hydrogen bridges.

In later years, Sybolt, with his various Ph. D. students, introduced aspherical scattering models  (Hirshfeld, 1977). In the meantime, our laboratory was provided with a new more advanced 4-circle diffractometer: the Philips PW1100. The heart was a Honeywell 316 system   (16 bit words). the software could not be programmed so easily (we had to use machine language), but this was no problem for Sybolt. The horizontal and vertical slits in this system were fixed. and depending on the Bragg angle it would be better to adapt these widths. So, we developed a (horizontal) variable slit and Sybolt implemented the software in machine language in the system.

At the same time the we cooperated with the organic chemistry group of prof. D. Reinhoudt, because measurements on the new diffractometer could be done faster and computers were faster. A lot of organic structures were solved, in the framework of reaction mechanisms studies, the crown ether project, calixarenes etc.

In 1986 we obtained a new diffractometer: a CAD4 of Enraf-Nonius. (VAX/VMS system) On its computer all crystallographic tools could be used to measure, solve and refine complete structures.

In 1998 prof. D. Feil retired and Sybolt and me went to the Low Temperature group of prof. H. Rogalla and the research at this time was focused on thin layer experiments. E.g. a very simple procedure on the CAD4 was implemented (easy programming in a more or less FORTRAN way, special developed procedure) to determine the ‘miscut’ of a substrate, which was a very useful tool to determine the ‘step length’ which is important for the growing of layers. Also he went several times to the ESRF synchrotron in Grenoble (France), in order to measure termination layers of e.g. SrTiO3.

Later on, he went to the group of Prof. H. Hilgenkamp (ICE, Interfaces and Correlated Electron systems) were he, even after his retirement in 2014, gave lectures 3 or 4 days a week.  He supported people in his group and he was a vademecum for everyone.

I have very pleasant memories of Sybolt, not just professionally, but also socially. E.g. in 2009, when the 3rd stage of the Vuelta à España (cycling course) started in Zutphen, right before his door on the Groenmarkt, we were invited with a number of colleagues in his house and were very hospitably received.

(Text originally published on the website of the Dutch Crystallographic Society (NVK);  addition “Sybolt was the first treasurer …” by the ECA secretary.  Retaken with permission by NVK)